During his Unleash the Power Within seminar, Tony Robbins described one of our human needs as the need to contribute. Volunteering for the Olympics fulfilled this need for me in several ways.

I was fortunate enough to be at the same venue as my father. As an only child, family is very important to me. Just knowing that he was out there somewhere filled me with a sense of pride, comfort and joy. During our time at the venue, we were able to see each other several times in the workforce break tent between events. I really enjoyed sharing this experience with him and knowing that we both contributed to the success of the Vancouver 2010 Olympics.

At the end of the biathlon events, I was dismissed from my role in Anti-Doping, but before I went home I overheard that the stadium and range were going to be dismantled. To me, this was a call to action. Even though I was not part of the Biathlon Range or Stadium crew, I knew I had to lend my two hands and capable body. It was outstanding how well everyone worked together as a team to accomplish this significant goal in about one and a half hours.

Afterward, I stood in amazement on the range with my dad and thought, “Wow! I am at the Olympics with Dad.” I held on to my vision of participating in the Olympics; to me it did not matter that it was not as an athlete. We also took a group photo in the penalty loop, with a bunch of us standing on the podium, including myself.

These are stories and memories that Dad and I will continue to share and reflect on together for years to come.

I took my role as an Anti-Doping Chaperone very seriously, not because I was involved in Doping Control, but because I knew that our interactions with athletes, coaches, officials and team doctors would be part of shaping their Olympic experience and the stories they told when they went home. The feedback we had about Doping Control was that everything went very well. I am proud of our team at Biathlon.

I also spoke with athletes who were at Turin in 2006, who thought our facilities and athletes village were much better. I was also honoured to witness the pride of someone receiving his first Olympic medal. As volunteers, we are referred to as the “Blue Jackets” by John Furlong. We all had our roles and without them, the games would not have succeeded. I am also extremely grateful for all the spectators and residents of Vancouver and Whistler who I met. I noted the enthusiasm and pride they had for the athletes of their home nations, Canada or otherwise, and I was touched and amazed. Thank you to everyone who surrounded me and embraced this unique experience with me.

The legacies of the 2010 Olympic Games are many. Not only do we have new facilities to use for generations to come, but we also have a renewed sense of Canadian pride and memories of all those who journeyed here to participate (athletes, spectators, and athlete families). I hope that this pride carries over and the athletic accomplishments of the Olympic and Paralympic athletes inspires our nation to dig deep and become the champions they have inside themselves.

What are you going to do today to find and unleash your inner champion? 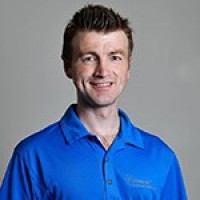